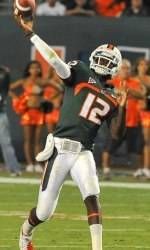 ACC Race Taking Shape With a Month to Play

CORAL GABLES, Fla. – Two months into the 2010 college football season, the ACC divisional races are beginning to take form and the `Canes are right in the thick of things. Miami (5-2, 3-1 ACC) is off to its best start in league play since 2005 and controls its own destiny in search of its first ACC title.

UM has four conference games remaining, three of which are against Coastal Division opponents Virginia (Oct. 30), Georgia Tech (Nov. 13) and Virginia Tech (Nov. 20). Those last two are the most important in the grand scheme of the 2010 season, as the Hokies currently lead the division at 4-0 with Georgia Tech a half a game back of Miami at 3-2.

Prior to the Duke game two weeks back, the `Canes knew that winning out would mean a guaranteed a spot in the ACC Championship game at Bank of America Stadium in Charlotte on Dec. 4. Two weeks and two wins later, Miami is still on track.

The Hurricanes’ 33-10 victory over North Carolina this past weekend is a clear indication that the team is not only on track, but focused and more motivated than ever to secure the Coastal Division crown.

“We’re taking the next step in the Atlantic Coast Conference,” head coach Randy Shannon said. “Playing North Carolina really was a big victory for myself and this whole university.

“A lot of credit goes to these football players, who are responding to a coaching staff [that is] doing a phenomenal job of really getting this team ready to play,” Shannon added.

The win over UNC was certainly an important one for everyone involved, but the `one game at a time’ mentality quickly shifted its focus to Virginia this week and ultimately Maryland the next.

While the Coastal Division race appears it will go down to the wire with the Hokies, `Canes and Yellow Jackets, the Atlantic Division is a little more clear cut with 4-0 Florida State leading a pair of 2-1 teams in Maryland and NC State and a 2-2 Clemson squad.

It’s no secret that a Miami-Florida State ACC Championship match-up would not only gain the conference a great deal of national attention, but give the `Canes a chance to avenge their loss to the Seminoles earlier this season. As if winning the division wasn’t enough motivation, you have to think the opportunity to play FSU again would be a welcomed sight.

There is a month of football to be played first, however. Virginia Tech’s remaining ACC schedule includes Georgia Tech (home), North Carolina (road), Miami (road) and Virginia (home). Georgia Tech has the Hokies, the `Canes and home game against Duke. It’s a stretch that will test the `Canes and likely determine the divisional race.

First and foremost, Miami needs to take care of business this weekend in Charlottesville. Fans can circle Nov. 13 and No. 20 on their calendars, but the players and coaches know that if they are going to stay on track, Virginia has to be the focus like North Carolina was last week.

Come out with the same determination and energy as they displayed against the Tar Heels and the Hurricanes’ journey for an ACC title that starts in Charlottesville this weekend will ultimately end up in Charlotte on Dec. 4.