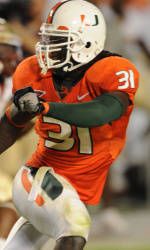 CORAL GABLES, Fla. – The University of Miami football team returned to the national rankings on Sunday, re-entering both the AP and USA Today/Coaches polls at No. 25 after its 28-13 win at Duke.

The `Canes, who ranked just outside of the Top 25 in both polls last week, are one of three ACC teams to be ranked this week along with Florida State and Virginia Tech. FSU is No. 16 in the AP poll and No. 17 in the coaches poll, while the Hokies jumped back into the rankings at No. 23 in both polls.

Oregon jumped up to No. 1 in both polls after Ohio State’s loss on Saturday. The same five teams round out the Top 5 in both polls, with Boise State at No. 2, Oklahoma at No. 3, TCU at No. 4 and Auburn at No. 5.

Miami (4-2, 2-1 ACC) has won three of its last four games as it returns to Sun Life Stadium this weekend to play host to North Carolina on Saturday at 7:30 p.m.

The `Canes have now been ranked in seven of the first eight polls this season.