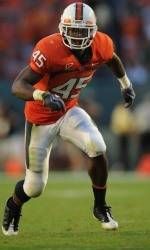 CORAL GABLES, Fla. – Wednesday the `Canes practiced under soaking wet conditions as Tropical Storm Nicole was working its way towards South Florida. It was a different distraction on Thursday, as the team practiced with artificial crowd noise being pumped in through loud speakers on the Greentree Practice Fields.

Thursday’s distraction was welcomed however, as Clemson officials announced earlier this week that Memorial Stadium is sold out for Saturday’s noon contest. Better known as “Death Valley”, the Tigers’ home stadium seats 81,500 and is widely recognized as one of the tougher places to play not only in the ACC, but in the country.

“I came here knowing it would be loud and Clemson would hit hard, but the noise was the biggest factor. I didn’t concentrate as well because of it.”

Herschel and the Georgia Bulldogs lost that game 13-3 in 1981. Wonder if they used loud speakers in practice that week?

TRAVEL DAY AHEAD
Thursday’s practice marked Miami’s last this week in Coral Gables, as the team will charter up to the Greenville-Spartanburg International Airport tomorrow afternoon. Once there, the team will hold meetings and a final walkthrough to go over last minute details before the game.

THE MIAMI-CLEMSON SERIES
– Miami leads the all-time series with Clemson, 5-3.
– The last time the two teams met, Clemson used a Kyle Parker to Jacoby Ford 26-yard touchdown hook-up to win in overtime last year in Miami, 40-37.
– The last three meetings between the teams have all went to overtime and have been decided by a combined 15 points. Miami won the lone meeting in Clemson, S.C., 36-30, on Sept. 17, 2005.

SCOUTING THE TIGERS
Clemson enters its ACC opener at 2-1 having knocked off North Texas and Presbyterian in the first two weeks before losing a heartbreaker at Auburn in overtime on Sept. 18.

Quarterback Kyle Parker has been solid for the Tigers with six touchdown passes and only one interception while going 35-of-60 for 503 yards in his first three games this season. The Tigers rank 17th nationally in scoring offense, averaging 39 points per game.

Clemson’s rushing attack thus far has been the sparkplug of the offense. The Tigers are averaging 215.0 yards per game on the ground led by sophomore running back Andre Ellington, who has rushed for 273 yards on 37 carries and four touchdowns. Junior running back Jamie Harper has carried 31 times for 154 yards.

Tight end Dwayne Allen has been Parker’s favorite target. Allen leads all receivers with eight catches for 156 yards and one touchdown. Running back Jamie Harper has five catches – three for touchdowns.Defensively, the Tigers rank seventh nationally in turnover margin (1.67) and fourth nationally in tackles for loss (8.67). Clemson boasts one of the best safeties in the country in safety DeAndre McDaniel, who leads the team with 20 stops (16 unassisted, four assisted) while adding an interception and three pass breakups. Defensive end DeQuan Bowers already has 17 tackles, which includes a team-high six tackles for loss and three sacks.

Cornerback Marcus Gilchrist is the Tigers’ return threat on both punts and kickoffs. He is averaging 18.3 yards per punt return and 23.3 on kick returns. Punter Dawson Zimmerman is averaging an impressive 46.1 yards per punt while Clemson ranks eighth nationally in net punting (42.35). Chandler Catanzaro handles kicking duties and is 2-for-3 in field goal attempts.

TV INFORMATION
Saturday’s game will kick off at noon and will be televised live on ESPN2, ESPN2 HD and ESPN 3D. Dave Pasch, Bob Griese and Chris Spielman will call the action on ESPN2, while Dave Lamont, Tim Brown and Ray Bentley have the call on ESPN 3D.