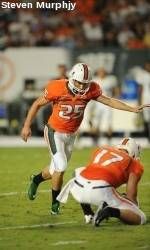 CORAL GABLES, Fla. – Hurricane fans need to set aside time Thursday night as the University of Miami football program will be featured in great detail on both Hurricane Hotline and Hurricane Gameday two days before the 16th-ranked ‘Canes play at Clemson.

As is the case every Thursday throughout the remainder of the season, Joe Zagacki and Don Bailey Jr. will be live at Monty’s in Coconut Grove to broadcast Hurricane Hotline from 7-9 p.m. on 560 WQAM. This Thursday, fans in attendance will have a chance to win suite tickets to next weekend’s rivalry game against Florida State at Sun Life Stadium.

Fans in attendance at Monty’s will also have the opportunity to ask Zagacki and Bailey Jr. questions live on the show while those listening on the radio can send questions to the `Canes radio team via Twitter @hurricanesports.com.

Before fans head out to Monty’s, find a seat on the couch and check out a brand new edition of Hurricane Gameday featuring head coach Randy Shannon. Tune into CSS at 5:30 p.m. to catch coach Shannon’s take on Miami’s win at Pitt and its upcoming game at Clemson. In addition, the show will feature a behind-the-scenes look at the team’s trip to Pittsburgh, a story on Lou Groza and Ray Guy award candidate Matt Bosher and a inside look at UM tailgating on the road.

No. 16 Miami will kick-off its ACC season Saturday, Oct. 2 at noon against Clemson at Memorial Stadium. The Hurricanes (2-1) and the Tigers (2-1) have gone to overtime in each of their last three meetings.

Monty’s is located at 2550 S. Bayshore Drive, Coconut Grove, FL, 33133. Fans are encouraged to arrive early to get a table near the action. Hourly specials will be available throughout the show.