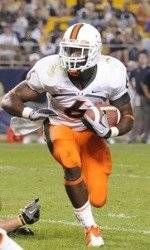 CORAL GABLES, Fla.– It’s still too early to say where Miami’s blowout win at Pittsburgh on Thursday will move the `Canes in the rankings. It’s certainly too soon to know the importance it will have on the rest of the season. But there is one thing we do know – a talented Hurricanes team just got better.

Miami’s loss at Ohio State the second week of the season exposed problems, not weaknesses. Missed tackles, miscommunication and lack of mental focus eventually doomed the `Canes in Columbus. Eleven days later in the same part of the country, a different team showed up.

The `Canes quickly asserted their dominance over Pitt, driving 80 yards on the game’s opening series to essentially put the game away. At the end of the first quarter, the `Canes had an absurd 116-to-14 advantage in total offense. At halftime, the nation’s leading returning rusher Dion Lewis had just six yards on four carries against a UM defense that played its best game in years.In Shannon’s eyes, it came down to the basics.

“Defensively, I thought we did a tremendous job of tackling,” Shannon said after the win. “Going against two great running backs… that was really huge for us to go out there and tackle. We did a great job of tackling and getting guys to line up.”

That effort will undoubtedly lead to the defense being ranked among the nation’s elite after this weekend. The tackles for losses continue to pile up – that’s 34 in just three games now. Sean Spence looks like a better version of his freshman self. The defensive line hasn’t pressured the quarterback to this degree since the early 2000’s.

Randy Shannon knows he has a team capable of more, and he couldn’t have made that more apparent to his team over the last two weeks. The team obviously bought in.

And despite the fact that Jacory Harris tossed two interceptions against the Panthers, it’s good to not only see him bounce back and put together a solid outing, but to see the defense pick up their guy and get two picks of their own late in the game to keep Pitt out of the end zone.

Bottom line is the `Canes bought into practice, went back to the basics and moved forward with an increased focus on working together and being held accountable.

The process that Shannon consistently stresses to those around the program is well on its way. Next week doesn’t get any easier though with a trip to Death Valley to play a big, physical Clemson squad.But if the Ohio State game proved anything, the Hurricanes aren’t going to be out-classed by anyone when it comes to strength and speed.

“We’re not that far away at all,” Shannon said of his team’s title chances.

Not quite there yet though. A lot more work to be done on Greentree.