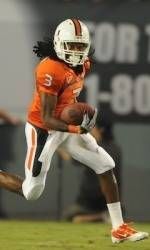 CORAL GABLES, Fla.– University of Miami football student-athletes Travis Bemjamin, Matt Bosher and Lamar Miller have been recognized as national players of the week by the College Football Performance Awards. Benjamin was recognized as a punt returner, Bosher as a punter and Miller as a kick returner.

Benjamin and Miller each had a return for a touchdown in No. 12 Miami’s 36-24 loss at No. 2 Ohio State on Saturday. Miller returned a kick-off for an 88-yard touchdown in the first quarter against the Buckeyes before Benjamin ran back a punt for 79 yards in the second quarter.

The last time, a Miami player returned a kickoff for a touchdown was Devin Hester at NC State on Oct. 23, 2004. Hester’s return went for 100 yards.

Benjamin’s punt return of 79 yards tied for the 10th longest in school history. It also was his first career punt return for a touchdown and the first for Miami since Thearon Collier’s 60-yard punt return last season against Virginia.

Bosher punted twice for 98 yards, an average of 49 yards per punt against the Buckeyes. One of his two punts landed inside OSU’s 20 yard line.

Miami will take this week off before returning to the field on Thursday, Sept. 23 when the `Canes travel to Pittsburgh to take on the Panthers at Heinz Field.