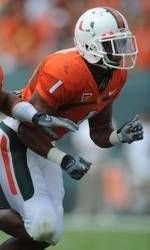 Miami Ranked No. 17 in Both National Polls Released Sunday

CORAL GABLES, Fla.– The University of Miami football team dropped to No. 17 in both the USA Today/Coaches poll as well as the AP poll. Both polls were released Sunday afternoon.

The ‘Canes, who were ranked No. 12 in both polls last week, lost a hard-fought game at No. 2 Ohio State on Saturday, as the Buckeyes came from behind to pick up a 36-24 win over the ‘Canes.

Miami (1-1) has a bye this week before traveling to Pittsburgh for a nationally-televised game on ESPN at Heinz Field on Thursday, Sept. 23 at 7:30 p.m.

The Top 5 teams in the country according to the coaches poll remained the same: Alabama, Ohio State, Boise State, Texas and TCU.

The AP’s top four – Alabama, Ohio State, Boise State and TCU – remained the same, but Oregon moved up to No. 5 after its blowout win at Tennessee on Saturday.

Miami is the only Atlantic Coast Conference team ranked in both polls.