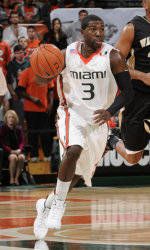 “Not only have we put together a challenging schedule for our team,” said Coach Haith, whose Hurricanes have averaged more than 20 wins over the last three seasons, “but we also put together an exciting lineup for our fans. As our program looks to get back into the NCAA Tournament, we have scheduled some tough non-conference games.

“Competing in a league that has produced five national champions over the last decade ensures we will have an exciting schedule. In addition to facing the last two national champions in Duke and North Carolina in ACC play, we head to Memphis – a very successful program over the last decade, and we are bringing in Ole Miss of the SEC and West Virginia – a Final Four team last year – to the BankUnited Center. We looked closely at the Miami Heat’s schedule and did our best to accommodate all of the basketball fans in South Florida.”

Fifteen of Miami’s 31 regular-season contests will be at home at the BankUnited Center, including eight games versus conference opponents. UM’s home lineup is highlighted by televised non-conference matches versus Ole Miss (Nov. 30, FS-FL/NESN) and West Virginia (Dec. 4, SUN), its ACC home opener against Boston College (Jan. 15, ESPNU) and home contests versus North Carolina (Jan. 26, ESPN or ESPN2) and Duke (Feb. 13, FSN). The Hurricanes have played tight games versus the Blue Devils as of late – with their last four games decided by an average of just 3.5 points, including a 77-74 setback in their last meeting in the semifinals of the 2010 ACC Tournament.

“My staff and I believe we have a special group of kids this season that can accomplish some great things,” said Coach Haith. “I look forward to getting this year started with the support of our great Hurricanes fans.”

Miami hoops action begins with a pair of exhibition contests versus Barry (Nov. 3) and Florida Southern (Nov. 8), followed by the home opener versus Jacksonville on Fri., Nov. 12 – the first of four regular-season home games for the Hurricanes in November.

On Mon., Nov. 15, the Hurricanes open their road schedule at Memphis, kick starting ESPN’s third annual College Hoops Tip-Off Marathon. Miami returns to the road to face Rutgers of the Big East on Sun., Nov. 21, in Piscataway, N.J., and adds another early-season away game at Florida Gulf Coast on Sat., Nov. 27.

After three-straight home games – including back-to-back televised contests against Ole Miss (Nov. 30, FS-FL/NESN) and Bob Huggins’ West Virginia squad (Dec. 4, SUN), the Hurricanes return to the Orange Bowl Basketball Classic versus in-state foe UCF on Sat., Dec. 18, at the BankAtlantic Center in a game to be carried live by SUN/FS-FL.

Miami wraps up the heart of its non-conference schedule in the Las Vegas Holiday Hoops Classic from Dec. 21-23, taking on 20-win teams in Oral Roberts and Akron, as well as Rice.

UM has a challenging start to its 2011 ACC schedule, opening league play with back-to-back nationally-televised road games at Duke (Jan. 2, FSN) and at Clemson (Jan. 8, ESPNU), before returning home for a pair of games against Boston College (Jan. 15, ESPNU) and Florida State (Jan. 19, RSN).

The Hurricanes then pack their bags for two of the three remaining games in January, heading to NC State (Jan. 23, Raycom), then returning home to face North Carolina (Jan. 26, ESPN or ESPN2), before closing the month at Virginia Tech (Jan. 30, FSN).

Miami returns to sunny South Florida to open February with home contests versus Georgia Tech (Feb. 3, ESPN or ESPN2) and Virginia (Feb. 5), before heading back north to face Wake Forest (Feb. 9, RSN). UM opens the next week with a nationally-televised Sunday showdown versus Duke (Feb. 13, FSN), and then travels to the Greensboro Coliseum – site of the 2011 ACC Tournament – for a rare February non-conference meeting with UNC Greensboro on Tues., Feb. 15.

Miami begins March at home versus Maryland (March 2, ESPNU), before hitting the road for its regular-season finale at Georgia Tech (March 6, Raycom).

The ACC Tournament is slated for March 10-13 at the Greensboro Coliseum in Greensboro, N.C.