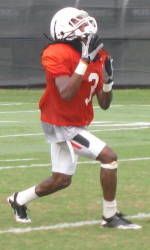 With the opener against FAMU now just over a week away, the Hurricanes shifted their focus from camp to game week by working against scout teams in 11-on-11 and 7-on-7 action. As is customary, several players donned different numbers in an attempt to best simulate the opposition. With that said, the ‘Cane backed off on contact and focused more on positioning and assignments.

Wednesday marked the first day of 2010 fall classes at the University of Miami and that was on everyone’s mind this morning on Greentree. The team began practice at 6:45 a.m. to give those with 9 a.m. classes enough time to shower, change and get to class on time. Head coach Randy Shannon continued to stress to the team about the importance of attending class and focusing on school now that classes have started back up. Shannon made sure those with 9 a.m. classes were off the field a little early to get a head start on making it across campus.

Travis Benjamin stood out offensively Wednesday morning, catching the most balls and taking three to the house – including a long TD pass from Jacory Harris in 11-on-11 action. Allen Hurns also turned a few heads with two long catches. Defensively, Ray-Ray Armstrong had an interception and Nathan Gholston was praised by the coaches for forcing a fumble in the secondary.

The ‘Canes will return to Greentree Thursday morning for another early practice before taking Friday and Saturday off. From there, the team will practice Sunday, Monday and Tuesday leading up to the opener at Sun Life Stadium on Sept. 2.

The Hurricane Club is proud to announce the first-ever “Canes Carnivale” interactive festival taking place Saturday, Aug. 28, in the Basketball Field House and H-100 parking lot at the BankUnited Center on the UM campus in Coral Gables, Fla.

To order tickets for the 2010 season, call 1-800-GO-CANES or visit www.hurricanesports.com