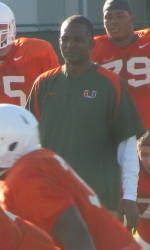 CORAL GABLES, Fla. – With the team’s final scrimmage of fall camp set for Monday, the University of Miami football team began its final two-a-day practice session Saturday morning on the Greentree Practice Fields. The `Canes will return to campus this afternoon at 3:15 p.m. for a lighter practice before holding a quick walkthrough Sunday morning.

O-Line Looks Good
Saturday morning was a great indicator as to how far Jeff Stoutland’s offensive line has improved since day one of camp. Starting with Seantrel Henderson and Malcolm Bunche, the big tandem was praised on a number of occasions for creating a big surge on their side of the line. Tyler Horn had a big block to set up a run up the middle by Damien Berrry, while Orlando Franklin and Harland Gunn created a big hole for Lamar Miller to run through on the left side.

Break Time
After a tough, physical practice Saturday morning, the `Canes will grab some lunch and then head to meetings at 2 p.m. before returning to Greentree for another two-hour session in the late afternoon hours. Head coach Randy Shannon said this afternoon’s practice will be lighter than the morning session, with more passing drills emphasized.

– Jacory Harris connected with Leonard Hankerson on three passing plays resulting in a combined 80-85 yards. Harris also connected with Travis Benjamin on a deep pass late in team drills at the end of the session.

– Damien Berry broke off a number of first down runs, including one up the middle during inside run drills.

– Spencer Whipple’s recent success continued Saturday morning, with the junior connecting with Ben Bruneau on a 60-yard touchdown and Aldarius Johnson on a 30-yard play down the left sideline.

– Lamar Miller and Storm Johnson each had a number of receptions out of the backfield, including a screen to Miller that went for about 25 yards.

– Ramon Buchanan had a fumble recovery during inside run drills and later added a tackle for a loss in team work.

– Kacy Rodgers recorded a tackle for a loss and a pass break-up in blitz drills.

– Dyron Dye recovered a fumble late in the team session.

– Sean Spence had three tackles and a QB pressure.

– Keion Payne had a pass defended and a tackle.

The Hurricane Club is proud to announce the first-ever “Canes Carnivale” interactive festival taking place Sat., Aug. 28, in the Basketball Field House and H-100 parking lot at the BankUnited Center on the UM campus in Coral Gables, Fla.

To order tickets for the 2010 season, call 1-800-GO-CANES or visit www.hurricanesports.com