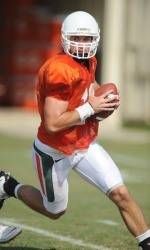 CORAL GABLES, Fla. – The University of Miami football team returned to the Greentree Practice Fields Friday morning, returning to the basics after Wednesday’s scrimmage and Thursday’s day off. With the Hurricanes’ season-opener against Florida A&M now less than two weeks out, the team returned to practice with increased energy and enthusiasm during the early morning session.

The UM team is more than accustomed to early morning practices under head coach Randy Shannon. To accommodate class schedules and avoid usual afternoon showers, the team normally starts practicing around sunrise (or even before) during the regular season. Despite it still being camp, Friday was one of those days as all the freshmen had mandatory orientation beginning at 9:30 a.m. That meant players and coaches were on the field just before 7 a.m. to stretch and get in some early work before practice officially started shortly thereafter.

A couple of funny moments post-practice….First one came from junior wide receiver Aldarius Johnson… Wide receivers coach Aubrey Hill was getting a workout in after practice had ended. After a few sprints on Greentree, Johnson yelled to an exhausted Hill to stand up straight up and keep his hands off his knees, giving the coach a little taste of his own medicine…..The second came from defensive backs coach Wesley McGriff, who decided to join the players in their usual post-practice ice tubs. McGriff slowly worked his way in with Jared Wheeler and Kylan Robinson, getting laughs from the crowd around him as he struggled to get in.

Saturday will mark the team’s final two-a-day of fall camp, with the team practicing at 8 a.m. and 3:15 p.m. on Greentree. Sunday will then be another short walkthrough session before the team holds its final scrimmage of camp on Monday.

– Spencer Whipple had the best day among the quarterbacks, completing long passes to Tommy Streeter, Billy Sanders, Ben Bruneau and Kendal Thompkins. His pass to Streeeter went for a 60-yard touchdown.

– Leonard Hankerson had the best day among the receivers, catching three balls for gains of 15-25 yards.

– Damien Berry and Lamar Miller stood out in the running game. Berry had a handful of strong runs while Miller had a 60-yard TD dash up the middle of the field.

– Jacory Harris connected with Travis Benjamin on a deep ball up the middle.

– Ramon Buchanan was the star of the defense Friday, making a couple big hits during inside run drills before adding an interception and two quarterback hurries in 11-on-11 action.

– Micanor Regis had another strong practice, getting in the backfield for a sack and a QB hurry.

– Brandon Harris and DeMarcus Van Dyke shut down the outside of the field today, with each recording a few pass break ups.

– Luther Robinson and Jeremy Lewis each had two quarterback hurries.

The Hurricane Club is proud to announce the first-ever “Canes Carnivale” interactive festival taking place Sat., Aug. 28, in the Basketball Field House and H-100 parking lot at the BankUnited Center on the UM campus in Coral Gables, Fla.

To order tickets for the 2010 season, call 1-800-GO-CANES or visit www.hurricanesports.com.