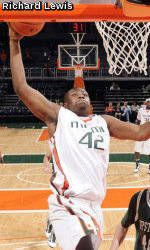 CORAL GABLES, FLA. – The University of Miami men’s basketball team will travel to Memphis to open ESPN’s third annual College Hoops Tip-Off Marathon on Tues., Nov. 16, at midnight. The game will be broadcast live on ESPN and simulcast online at ESPN3.com.

ESPN’s annual celebration of the opening of college basketball season will broadcast 20 live games – 19 men’s and one women’s – in a minimum of 25.5 hours across ESPN, ESPN2, ESPNU and ESPN3.com.

Games are scheduled to tip off every two hours, beginning with the Hurricanes versus the Tigers at midnight.

“It’s a tremendous opportunity for our program to participate in a nationally-recognized event that celebrates college basketball,” said head Miami coach Frank Haith. “The team will certainly be amped to play on national television versus great competition. FedExForum is a tough arena to play in, so it will be a good challenge for this squad early in the season.”

It marks the 12th meeting between the programs and the first since Dec. 21, 2000, when Miami defeated Memphis, 66-57, at home. Although the Tigers hold the one-game series advantage, 6-5, the Hurricanes have won three of the last four meetings between the programs – including two of their last three games at Memphis.