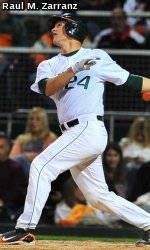 No. 5 Miami Falls to No. 6 Georgia Tech in Series Opener

After a solo homer by Yasmani Grandal gave Miami (36-12, 18-7 ACC) a 1-0 lead in the second, Georgia Tech (40-9, 18-7 ACC) responded with four runs in the bottom of the second and five more in the third before pulling away for the 11-run win. The loss snapped Miami’s seven-game winning streak.

Deck McGuire earned his seventh win of the season for the Yellow Jackets, allowing one run on four hits while walking three and striking out nine. Cole Leonida and Thomas Nichols each had three hits for Georgia Tech, while Chase Burnett and Jay Dantzler combined to drive in seven runs.

Grandal’s second inning blast – opposite field shot to left – was his 11th homer of the season. He also recorded a double off the wall in center, finishing the night 2-for-3.

The Yellow Jackets’ four-run second came on a three-run triple by Burnett followed up by an RBI single by Dantzler.

Georgia Tech was at it again in the third, going up 9-1. The inning was highlighted by a two-run triple by Dantzler, who finished with a pair of hits on the night.

The Yellow Jackets then scored two more runs in the fourth, two in the fifth, one in the seventh before UM added two late runs in the ninth on RBI singles from David Villasuso and Ryan Perry.

Game two of the three-game set is slated for Saturday at 7 p.m. and will be televised live on CSS. Lefty Chris Hernandez (7-2, 3.04) will take the mound for the `Canes while Georgia Tech will counter with righty Mark Pope (7-0, 3.73).