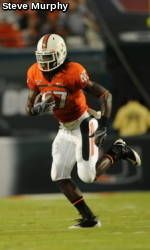 CORAL GABLES, Fla. – The University of Miami football program was among those honored today by the National Collegiate Athletic Association (NCAA) for its latest Academic Progress Report score (APR).

The football program was recognized as having posted a multi-year APR score in the top 10 percent. Miami was the only Bowl Championship Subdivision (BCS) team among the 26 schools recognized that finished ranked in the final USA Today Coaches Poll and Associated Press poll after the 2009 season. UM and Duke were the only two Atlantic Coast Conference football programs recognized.

“We are very proud of our football program for earning this tremendous recognition by the NCAA,” UM Director of Athletics Kirby Hocutt said. “Our athletics department mission is focused on developing and supporting our student-athletes in their efforts to achieve personal, academic and athletic excellence. I extend my sincere appreciation to our student-athletes for their continued hard work and focus on academic success.”

The APR is designed to provide a real-time look at a team’s academic success each semester by tracking academic progress for each student-athlete. Each year a student-athlete may earn one point for being eligible and one point for retention per semester for a total of four points per academic year. The total points are then divided by the number of potential points each team could have earned. That percentage is then multiplied by 1000 to provide each team with its APR. The NCAA has established 925 as the cut-off mark for an acceptable score. Any team below that standard may be subject to penalties.