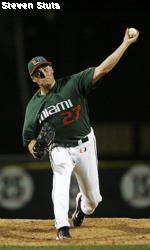 CORAL GABLES, Fla. – The 13th-ranked University of Miami baseball team lost its Atlantic Coast Conference opener to Boston College Friday night, 3-0, at Alex Rodriguez Park at Mark Light Field. Despite six strong innings from starter Chris Hernandez, the Hurricanes were unable to get BC starter Pat Dean, who struck out nine in eight innings of work to earn the win.

Miami (8-4, 0-1 ACC) out-hit Boston College (6-6, 1-0 ACC), 7-to-6, but committed three errors and missed several opportunities to drive in runners throughout the contest.

Hernandez (1-2) turned in yet another solid outing in a losing effort, allowing just one earned run on five hits while walking two and striking out five in his fourth start of the year. E.J. Encinosa came on in the seventh to get UM out of a jam, retiring three straight with runners on first and second with no outs. Encinosa tossed 2 1/3 scoreless, allowing just one hit before Sam Robinson came on in the eighth to record a pair of outs.

Dean (3-0) allowed six hits and walked one, but was able to keep UM off the board until handing it over the Matt Brazis, who tossed a scoreless ninth to earn his second save of the season.

Scott Lawson reached base three times for Miami, going 2-for-3 with a walk while Yasmani Grandal also had a pair of hits for the Hurricanes.

An RBI double by Watson in the third scored Zepenas from third for the first run of the game in the top of the second.

BC pushed its lead to 3-0 in the fourth when another double by Watson scored both Zepenas and Anthony Melchionda.

Miami’s best chances to score came in the second and the ninth. Grandal led off the second with a double and after an infield single by Lawson put runners on the corners with no outs, Dean retired the next three in order, leaving UM’s top hitters on the day stranded.

In the ninth, a walk by Lawson and a single by Harold Martinez put runners on first and second with no outs, but a double-play grounder and a fly out ended UM’s last chance to put runs on the board.

Game two of the three-game series will be played Saturday night at 7 p.m. and will be televised live by CSS. Right-hander Jason Santana will take the mound for UM while BC with counter with righty Kevin Moran.