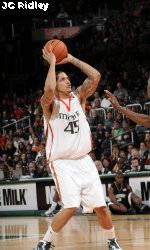 Gamble scored a career-high tying 13 points and added a season-high 12 rebounds, while added 13 points for Miami (18-9, 4-9 Atlantic Coast Conference) who avenged an early-season loss at Virginia.

The Cavaliers (14-12, 5-8), which lost its sixth-straight game, was led by Sylven Landesberg’s 27 points as he hit his first six three-point field goal attempts.

He scored eight consecutive points on three jump shots to give Virginia a 28-26 advantage during a back-and-forth first half, but Miami’s Durand Scott hit a three late in the opening stanza and then used a driving layup to give the Hurricanes the 33-32 lead at the break.

Miami, who did not shoot a free throw in the opening half for the first time all season, converted all eight free throws in the final 3:13 and Virginia was unable to pull within single digits.

The Hurricanes play host to NC State on Sat., Feb. 27, at 4 p.m. in their unprecedented third-straight home ACC game. The game will be carried locally on WBFS.