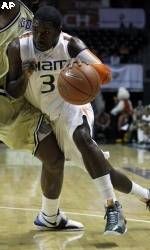 CORAL GABLES, Fla. (AP)–James Dews made a 15-footer at the buzzer Wednesday night to give Miami a 64-62 victory over No. 20 Georgia Tech.

Dews missed the front end of a one-and-one with 19 seconds left, and Iman Shumpert sank a layup for Tech to tie the game with 10 seconds to go. That capped a comeback by the Yellow Jackets, who trailed by 14 early in the second half.

Following a timeout, the Hurricanes moved the length of the court and Durand Scott fed Dews, who faked out a defender before swishing his shot. Dews then leaped into a mob of jubilant teammates.

The Hurricanes fell behind 8-0, then outscored Georgia Tech 41-19 the remainder of the first half. They won despite shooting 32 percent in the second half.

Dwayne Collins had 13 points and 11 rebounds for Miami. Adrian Thomas scored 12, all on 3-pointers, and Malcolm Grant had 11, all in the first half. Reserve Reggie Johnson added 10 points and seven rebounds in 16 minutes.

Brian Oliver scored 19 points off the bench for Georgia Tech, and junior Gani Lawal had 17 points and a career-high 18 rebounds. Teammate Zachery Peacock, a Miami native, shot 2 for 9 and totaled only four points.

Free throws have been a problem all season for the Yellow Jackets, and they made only eight of 16. They also shot 6 for 17 from 3-point range.

The Hurricanes missed their first seven shots before Garrius Adams hit a 3-pointer more than five minutes into the game. A pair of 3-pointers by Grant put the Hurricanes ahead, and with a 14-3 run they increased the lead to 29-18.

Miami shot 7 for 15 from 3-point range in the opening half.

Tech went to a press in the second half and that threw the Hurricanes out of their offensive rhythm. Oliver sank a pair of 3-pointers during a 13-2 run by the Yellow Jackets that cut the deficit to 52-50.

The Hurricanes rebuilt the lead to 60-52, and Collins’ dunk made it 62-58. But Shumpert sank two free throws with 20 seconds left for Tech, then hit the layup for the tie.