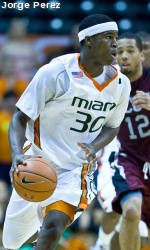 The Hurricanes (14-1) never trailed and used a double-digit scoring run in both halves to pull away in their first visit to Pepperdine (4-12) since December 1969.

Adrian Thomas, who scored 15 points on a career-high five 3-pointers off the bench, began and ended a 10-0 run with 3-pointers to help Miami to a 21-10 lead with 12 minutes to go in the first half. The Hurricanes led 45-36 at halftime.

Miami, which has won 21 consecutive nonconference regular-season games, made 13 3-pointers and shot 53 percent from the field overall.

The Hurricanes will host Wake Forest in their next contest, serving as Miami’s ACC home-opener on Saturday, Jan. 9, inside the BankUnited Center at 6 p.m.