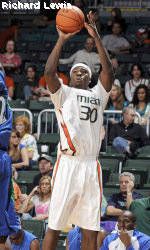 Miami Defeats Bethune-Cookman to Improve to 13-1

Dews, Garrius Adams and Malcolm Grant each hit 3-pointers during a 13-2 spurt, which helped Miami build a 33-21 lead late in the first half. Grant’s conversion behind the arc with 3:30 remaining capped the run.

Grant has converted a three-point basket in all 14 games this season — the second-longest active streak in the ACC and tied for the 10th longest in school history.

The Wildcats (7-6) stayed within striking distance of the Hurricanes most of the first half. Jarrell Thomas’ 3-pointer with 7:24 left cut Miami’s lead to 20-19.

Unbeaten in its first 13 non-conference games this season, Miami will play at Pepperdine on Sunday before resuming league play against Wake Forest on Jan. 9.