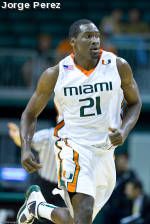 CORAL GABLES, Fla. (AP) — Dwayne Collins scored 17 points and Reggie Johnson added a career-high 13 as Miami improved to 7-0 in a 70-41 rout of USC Upstate on Saturday afternoon at the BankUnited Center.

It marks the second time under head coach Frank Haith that the Hurricanes have started the season 7-0 and the fifth time in program history. Miami advanced to the postseason in all four previous instances, including an NCAA Tournament berth in 2007-08.

Miami outscored the Spartans 20-4 and broke the game open during a 7:51 span midway through the first half. Collins scored six points during the spurt and Julian Gamble’s field goal with 6:45 remaining capped the run for the 25-11 Hurricanes’ lead.

Cyrus McGowan’s jumper with 3:13 left in the half gave the Hurricanes their first 20-point lead at 33-13.

Mezie Uzochukwu’s reverse layup 1:19 into the second half brought USC Upstate within 14 points, but Collins responded with seven-straight points in the next 2:33 to give Miami the 45-24 lead. UM would lead by as many as 32 points.

The Hurricanes forced 21 turnovers and held their opponents to just 41 points — the fewest points for a Miami opponent since a 94-41 victory over North Florida on Dec. 31, 2008.

Miami returns to the hardwood on Wed., Dec. 2, at 7:15 p.m. versus Minnesota in the ACC/Big Ten Challenge at the BankUnited Center. ESPNU will broadcast the game.