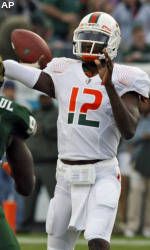 TAMPA, Fla. (AP) – Jacory Harris picked his receiver, let a spiral fly into the end zone and cringed when someone he wasn’t expecting came down with the football.

Fortunately for him, it was a teammate.

Harris’ 33-yard touchdown pass to Dedrick Epps – who wasn’t the intended receiver – late in the third quarter swung momentum back Miami’s way, and the 19th-ranked Hurricanes closed their regular season with a 31-10 win Saturday over South Florida.

“A fluke play,” Harris said. “A little bit of miscommunication. … He caught the touchdown. That’s all that counts.”

Harris threw for 161 yards and two scores, and Javarris James rushed for two short touchdowns as the Hurricanes ran out to a quick 21-3 lead. Miami (9-3) used a strong ground game to outgain the Bulls 401-220, even with left tackle Jason Fox out of the lineup because of illness.

Damien Berry rushed for 114 yards, Graig Cooper added 83 more and the Hurricanes capped their first nine-win regular season since 2005. They’ll try for their first 10-win season since 2003 in the bowl game – destination undetermined but surely helped by Saturday’s showing.

“We finished strong,” Miami coach Randy Shannon said. “That tells you about this team. If we get everybody on the right cylinders and doing all the right things, we’re going to be fine. I’m very proud of this football team, this coaching staff and what we’ve done this year. We’ve still got another game to go and we still have things we need to accomplish.”

A.J. Love caught a 12-yard touchdown pass for South Florida (7-4), which closes its regular season at Connecticut next Saturday. The Bulls fell to 7-28 when allowing at least 31 points.

The schools were meeting for just the second time, with plans calling for the teams to play in late November annually until 2013, by which time another true Sunshine State rivalry could be born.

It’s not there yet, and to the chagrin of 66,469 – the second-most in South Florida history – Miami wasted no time pointing that out.

“I think they tried to make it a big deal, the in-state rivalry with USF,” Miami linebacker Colin McCarthy said. “I think we made a statement tonight. And we’re going to make another statement in the bowl game and carry it on to next season.”

A 12-play, 81-yard drive on the opening series set the tone, fueled by a gutsy call and Berry’s 6-yard run on 4th-and-1 from the USF 17. On the very next play, Leonard Hankerson made a juggling catch in the right side of the end zone, and the Hurricanes were on their way.

Darryl Sharpton forced USF quarterback B.J. Daniels into a fumble later in the opening quarter, Randy Phillips recovered and James went in from 5 yards out three plays later for a 14-0 lead. Midway through the second quarter, James struck again, a 2-yard scoring burst to wrap up a 10-play, 61-yard drive and put Miami up 21-3.

“It’s just we didn’t execute.” USF defensive lineman Jason Pierre-Paul said. “And I’ll give it to them, they beat us up front.”

The Hurricanes ran 36 plays for 233 yards on their first four drives, with three touchdowns. Their next four drives went three-and-out every time, netting a total of 8 yards, with Harris – already nursing a tender thumb on his throwing hand – getting his arm jolted on the last of those possessions.

Daniels hit Love on third-and-goal from the 12 to make it 21-10, and Miami seemed in trouble.

That is, until Harris engineered Miami’s sixth touchdown drive of two plays or less this season.

Berry ran for 18 yards on the first play and Harris did the rest. He was trying to throw to Travis Benjamin, but Epps ran a post route that Harris wasn’t expecting and simply beat his teammate to the ball for the score.

Now, the only thing left to do is hear which bowl comes calling.

“We deserve a big bowl game,” Harris said. “We play hard. We work hard. Our fans are going to travel. We deserve it.”