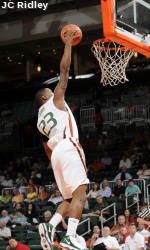 The Hurricanes (4-0) led 62-58 with 29 seconds to play and forced two Seahawks’ turnovers to hold on and advance to the championship round versus South Carolina.

James Dews added 17 points for Miami, while Cyrus McGowan finished with nine points, a game-high nine rebounds and a career-high five blocks. Dews and Grant were a combined to go 14 of 20 from the field.

Chad Tomko had 16 points for UNC-Wilmington (1-3), which was looking for its second upset in as many days after knocking off Penn State 80-69 in Thursday’s first round.