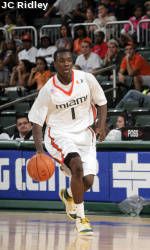 Malcolm Grant added 17 points and freshman Durand Scott had 14 points and eight assists for the Hurricanes, who saw all 13 players score in the game.

Miami hit 12 of its 14 3-pointers in the first half behind 12-of-17 shooting. Dews was responsible for knocking down five 3s.