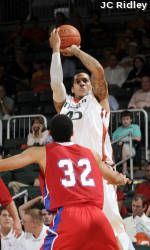 CORAL GABLES, FLA… – The University of Miami men’s basketball team returns to the hardwood on Mon., Nov. 16, playing host to local foe Nova Southeastern at 7:30 p.m. at the BankUnited Center.

The Hurricanes are back in action following Saturday’s 83-53 season-opening win over North Carolina Central. On Monday evening, the Hurricanes turn their attention towards local foe Nova Southeastern, who is opening its season at the BankUnited Center. It is the first meeting between the two programs.

HURRICANE WARNING
Under sixth-year head coach Frank Haith, Miami is 2-0 versus Division II programs during the regular season. The Hurricanes handily defeated Florida Southern in each of their last two season openers — and also knocked off the Moccasins, 85-52, in an exhibition game one week ago. Nova Southeastern competes in the same league as Florida Southern — the Sunshine State Conference. The Mocs are the preseason favorite to win their third-straight conference title, while the Sharks were picked to finish eighth of nine teams.

A HELPING HAND
True freshman Durand Scott dished out a game-high 10 assists with zero turnovers in Saturday’s season-opening victory over North Carolina Central. It was the most assists by a Hurricane in exactly three years, since Anthony Harris finished with 10 assists versus Alcorn State on Nov. 14, 2006. In addition, Scott is just the second Hurricane in program history — and the first since Thomas Hocker accomplished the feat in 1990 — to record double-digit assists with no turnovers.

SUNSHINE STATE SERIES
The Hurricanes are 318-153 (.675) all-time versus in-state opponents, including a 20-8 (.714) mark under head coach Frank Haith. Miami has won 51 of its last 63 games versus Florida schools, dating back to the 1992-93 season. In 2008-09, the Hurricanes went 6-2 versus Sunshine State teams — defeating Florida State, Florida Southern, Stetson, FIU, North Florida and Florida Atlantic.

In 2009-10, Miami will face up to eight in-state opponents during the regular season — Nova Southeastern, USF (at this week’s Charleston Classic), Florida Gulf Coast, Stetson, Florida Atlantic, Bethune-Cookman and Florida State (home and away).

Dwayne Collins has scored in double-figures a team-high 11 times versus in-state opponents — including a 24-point effort versus Florida Atlantic in 2008-09 (6-7 FGs, 12-16 FTs), followed by James Dews with seven.

Miami had three players in double-figure scoring: Adrian Thomas (16), Dwayne Collins (12) and Julian Gamble (10), with 12 of 13 Hurricanes scoring versus the Eagles. Thomas’ 16 points marked a career high, while he tied a career best with four three-pointers.

NEXT UP FOR THE `CANES
Following Monday’s home contest versus Nova Southeastern, the Hurricanes hit the road for the Charleston Classic in Charleston, S.C. Miami opens the tournament versus Tulane on Thurs., Nov. 19, at 1:30 p.m., in a game to be carried live by CSS. The Hurricanes then face either 2009 NIT champion Penn State or UNC Wilmington in the second round on Fri., Nov. 20, in another game to be broadcast live by CSS. The final round of games will be held on Sun., Nov. 22. Potential Sunday opponents are South Carolina, Davidson, USF and La Salle. The 6 p.m. championship game will be carried live by ESPN2.