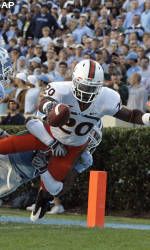 CHAPEL HILL, N.C. (AP) -Kendric Burney returned one of his three interceptions for a 77-yard touchdown and his third pick resulted in a bizarre fourth-quarter score that helped North Carolina beat No. 12 Miami 33-24 on Saturday.

Burney fumbled his third interception on what looked to be a forward lateral, but Melvin Williams picked up the loose ball and ran the last 44 yards for a score. The touchdown held up on review after replays showed the ball slipping from Burney’s hand, confirming a play that gave the Tar Heels (7-3, 3-3 Atlantic Coast Conference) a 30-17 lead with about 9 1/2 minutes left.

Casey Barth kicked four field goals, including the clincher with 1:57 left, to help North Carolina become bowl-eligible for the second straight year and give Butch Davis yet another win against his former program. It also was North Carolina’s fifth consecutive win against ranked teams dating to last season.

It was quite a way for the Tar Heels to close their home schedule. Their defense, which came in ranked fifth in the nation, allowed 435 yards but harassed Jacory Harris into a career-high four interceptions – with three going to Burney to end drives deep in North Carolina territory.

Harris threw for 319 yards and a touchdown for the Hurricanes (7-3, 4-3), and Graig Cooper and Damien Berry each ran for scores. But they had to play catch-up almost the entire game, with North Carolina using Burney’s long TD return to take a 20-7 halftime lead then getting a 32-yard field goal from Barth midway through the third.

It was a familiar scene for the Tar Heels, who led Florida State 24-6 in the third before faltering late and losing 30-27. This time, North Carolina held on, putting together an 11-play, 60-yard drive that took more than 5 minutes off the clock and set up Barth’s final field goal – the kind of drive it couldn’t manage against the Seminoles.

Ryan Houston ran for 76 yards for the Tar Heels, including 33 on that final drive. Greg Little had a 29-yard TD catch from T.J. Yates in the first quarter.

Burney finished with 170 interception return yards, a single-game ACC record, and became the first Tar Heel to have three picks in a game since Dre’ Bly in 1996.