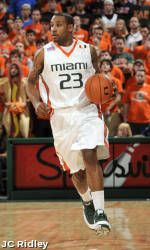 CORAL GABLES, Fla. – With the start of the 2009-10 season just about a month away, the University of Miami men’s basketball team officially begins team practice on Friday, Oct. 16, at the BankUnited Center.

In addition, both the men’s and women’s basketball teams will hold their second annual Hurricanes Hoopfest at the BankUnited Center from 7-9 p.m. on Wed., Oct. 21. During the event, fans will be able to watch the men scrimmage and the women practice for 30 minutes apiece, interact with the student-athletes during an autograph session and pick their seats for the upcoming season.

Sixth-year head coach Frank Haith, who spent the beginning of the summer serving as an assistant coach with the USA World University Games men’s basketball team, returns to the helm for Miami. The Hurricanes, who have advanced to the postseason in four of the last five seasons and seven times since 2000, return a pair of starters and seven letterwinners, including three players that started 16 or more games last season.

Despite the loss of two-time All-ACC First Team selection Jack McClinton to graduation, the Hurricanes welcome back two of the team’s top-three scorers in Dwayne Collins and James Dews, two of the team’s top-three three-point shooters in Adrian Thomas and Dews, and the squad’s leader in steals and rebounds in Collins, as well as a recruiting class ranked among the Top 25 by both ESPN and Scout.

Thomas, who is among 18 of Haith’s players to earn a degree in the last five years, is enrolled in graduate school.

Miami’s six newcomers in 2009-10 include Malcolm Grant and Reggie Johnson, who both redshirted last season, in addition to UM’s heralded recruiting class of Antoine Allen and ESPNU 100 picks Durand Scott, Garrius Adams and Donnavan Kirk. The 2009 class is Haith’s second Top 25 recruiting class in five years. In addition, Scott’s signing marked the second-straight season Haith has secured a five-star player rated among Scout’s top-25 overall recruits. He was ranked fifth in the nation among shooting guards by Scout, eighth by Rivals and 11th by ESPN, and also ranked among the top-25 overall players by Scout.

The Hurricanes will host an exhibition games at home versus Florida Southern on Mon., Nov. 9, at 7:30 p.m., before opening the regular season at home versus North Carolina Central on Sat., Nov. 14, at 4 p.m.