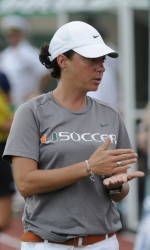 CORAL GABLES – The University of Miami women’s soccer team scored once in each half, in getting its first Atlantic Coast Conference victory of the season, 2-0 over the No. 9 Maryland Terrapins, Sunday afternoon at Cobb Stadium

Taliaferro is in her eighth season at the helm of the Miami soccer program, spending the three years prior at Illinios and has guided the Hurricanes to two straight NCAA Tournament appearances. The 100th win of her career also came against her alma mater

“Every win feels good, but you do like to compete well against your old school.” said Taliaferro. “Even though we lost, I thought we played well on Thursday and I felt we were able to build off of that. We were able to play at a consistent level and I was happy to get those goals when we did.”

After two straight shutout losses, the Miami offense responded against Maryland. The `Canes outshot their opponents by and 8-4 margin in the first half and 13-11 for the game.

After missing the first seven games of the season due to a leg injury, freshman Jordan Roseboro scored her first collegiate goal of her career in the 27th minute. Megan Siebert took one of Miami’s four first half corner kicks and placed it on found the left foot of Roseboro for the goal.

In the 64th minute, Miami was awarded another corner kick, with Siebert again taking the honors. The freshman played it back to senior captain Beverly Goebel. Goebel then found Brittney Steinbruch – who fought through a tackle before burying a left-footed shot into the right side of the goal from 25 yards out.

The goal was the second of the season for the star junior and it gave 26 for her career – three shy of Britney Butcher’s school record. Siebert was awarded her second assist of the day on the score and has a team-leading three on the season.

In preserving the shutout and at the time, the Miami lead, Alonzo made an athletic save from her backside in the 55th minute. Maryland’s Ashley Grove had a point-blank shot, but Alonzo sprawled out and denied the Terrapins top offensive threat.

“It feels great to break the record, but I couldn’t have done it without my teammates,” said Alonzo. “The offense played great today too, it feels good when everything works like it did today.”

Miami will travel to face in-state rival Florida State in its next contest, Sunday Oct. 4. The Seminoles will be the third straight match that the Hurricanes will face a ranked team. Currently FSU is the No.5 team in the nation.