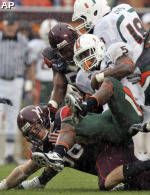 BLACKSBURG, Va. (AP) — No. 11 Virginia Tech harassed Hurricane quarterback Jacory Harris en route to a 31-7 defeat of No. 9 Miami in a downpour on Saturday.

Miami, ranked in the top 10 for the first since 2005, had a chance to take a commanding lead in the ACC’s Coastal Division. Instead, Virginia Tech (3-1, 1-0 Atlantic Coast Conference), Miami’s third consecutive ranked opponent, cooled off the Hurricanes.

Miami (2-1, 2-1) had given Harris all kinds of time in beating Florida State and Georgia Tech to start 2-0. The Hurricanes had a lot more trouble keeping the Hokies’ pass rush off their star.

After saying this week he looked forward to playing in front of a hostile crowd, he fumbled as he was being sacked on his fifth play, setting up a Hokies touchdown, and his day never got much better.

Harris finished 9-for-25 for 150 yards and was sacked three times.

Harris threw an interception that set up another score and pushed the Hokies lead to 31-7 lead. By then the fans who had braved the horrid conditions wanted to stay and enjoy every minute.

Virginia Tech also took the wraps off Tyrod Taylor, and he combined with Williams for most of the Hokies 272 rushing yards on the rain-soaked turf at sold-out Lane Stadium.

Williams ran for 150 yards, and Taylor finished with 75.

From the start, it looked like the Hokies’ day as a steady and chilling rain fell.

Helped by a blocked punt that was returned for a touchdown, several fortunate bounces and one big defensive stop, the Hokies led 21-0 by halftime and Miami never threatened.

The Hokies muffed one punt early in the first quarter and had another glance off a player’s leg deep in their own territory, but recovered both. They also botched a snap on a punt of their own, giving Miami possession at the Tech 23, but a false start penalty, a rush for a loss of 2 and a sack for minus-9 forced the Hurricanes to punt it away.

Harris and the Hurricanes did drive 46 yards in five plays for a touchdown just 1:43 into the third quarter, pulling them within 21-7. After Miami forced the Hokies to punt, they drove to the Virginia Tech 30 with a chance to make the quieting crowd really nervous.

Instead, with the help of two drops by Jimmy Graham, Miami faced a fourth-and-13 from the 33, went for it and Harris’ 9-yard completion to Dedrick Epps came up four yards short.

The Hokies then drove for Matt Waldron’s 22-yard field goal and it was 24-7.

The key to everything, though, may have come at the very beginning.

On Miami’s fifth offensive play, Dorian Porch sacked Harris from behind, forcing a fumble that Porch also recovered at the Hurricanes’ 11. Moments later Virginia Tech had a lead it would not relinquish.

Three runs by Williams for 15 yards and a 23-yard pass to Williams moved the ball near midfield, and three plays later Taylor hit Jarrett Boykin deep down the middle. The ball was perfectly thrown, and Boykin scored when cornerback Chavez Grant fell down.

In the second quarter, Matt Reidy picked up a blocked punt at the 1 yard line and stepped into the end zone, making it 21-0. The anticipated showdown had turned into a rout.