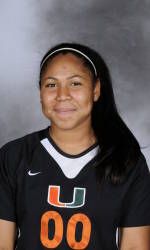 CORAL GABLES – The University of Miami women’s soccer team will take part in its second straight tournament as it will travel to the Pacific Northwest to compete in the University of Portland’s Nike Invitational, Sept. 11-13.

As the host team, Portland is the top-ranked women’s soccer program according to the latest Top Drawer Soccer poll. It enters the invitational with an unblemished 5-0-0 record and will face Miami’s Tricia Taliaferro’s former program, Illinois in the first day of competition.

The Hurricanes willl open the action on Friday as they face the No. 22 Washington Huskies at 7:30 p.m. EST.

Washington advanced to the second round of the NCAA Tournament in 2008 and enter the Nike Invitational with a 3-1-0 record so far this season. Last week Washington hosted the Husky Nike Invitational and defeated Columbia and Colorado College by a 6-1 margin.

Miami just wrapped up its inaugural Hurricane Cup this past weekend and headed into their first round match-up with the Western Carolina Catamounts as the No. 22 team in the nation. The `Canes handed the visitors a 1-0 loss on a Paulelette-Rick s Chambers header.

However in the championship game, Miami fell to the Navy Midshipmen 1-0, even though the home team outshot Navy 25-3.

On Sunday, Sept. 18, Miami will face Portland in the final game of the invitational at 5 p.m. EST. Miami has faced the Pilots only once in their history, in the 2000 season, falling 2-0 to the then 16th-ranked Portland squad. The Hurricanes have never faced Washington.

Live stats will be available for both of Miami’s contests this weekend and can be seen by clicking on the live stats link on the front page of hurricanesports.com.