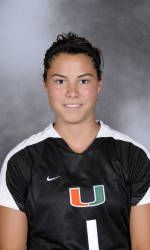 CORAL GABLES – The Hurricanes scored early and often en route to a 5-0 victory over the Florida Southern Moccasins in a scrimmage Friday evening at the University of Miami’s Cobb Stadium.

Miami’s first goal came from the Brittney Steinbruch on an assist from Lauren Singer in the 27th minute. A season ago, Steinbruch led the Hurricanes with eight goals while Singer led the team with six assists.

Later in the half, senior Paulelette Ricks-Chambers scored the first of her two goals after a Florida Southern turnover in their end, as the `Canes headed into the half with 2-0 advantage.

A pair of freshman accounted for the Hurricanes third goal. Megan Siebert (Troy, Mich.) fed Kate Howarth (Grand Blanc, Mich.) early in the second half for the third goal of the match.

Ricks-Chambers second goal came soon on a cross from Julianne Rickers. Rickers, a sophomore from Leesburg, Va. was second on the team with four goals in 2008.

The fifth and final goal of the match came on an outstanding individual effort from Howarth. After stealing the ball from the keeper, she gathered it in a fired a shot into the back of the net.

Freshman Ali Brennan (Columbia, Md.) saved the only shot she faced on the night, earning the shutout.

The Hurricanes will welcome the eighth-ranked University of Florida Gators in UM’s season opener on Friday, August 21 at 7:30 p.m.