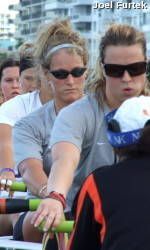 A Look at the 2009 University of Miami Rowing Team

Coral Gables, Fla. – The University of Miami Rowing Team officially opened up their spring season this past week. After two solid showings in scrimmages with Syracuse at the start of the week and with Michigan a week prior, Miami hosted a tri-meet with Rochester and Dowling College at Indian Creek Waterway in Miami Beach. The team was perfect on the day, not losing a single race to either opposing team.

The very next morning, Miami set out again to host the University of Connecticut. Connecticut, who comes to Miami Beach each year to train, was unable to keep up with the Hurricanes, as Miami took three out of four races for their third team win.

What makes this team so successful and eager to win each time out? Before the sun rises, the rowing team is already out on the water. Starting practice at 6 a.m. to avoid any boat traffic, very few people are able to witness the persistent work ethic that makes this team so strong. The boats set out from the launch with second-year Head Coach Robbie Tenenbaum riding alongside.

With each stroke, the team run’s through motions and drills all in nearly complete darkness. For about two hours, the rowers are pushing themselves in hopes to achieve success as they did this past week.

“At the beginning of practice it’s dark, so that is where our focus is the greatest. You’re getting into the whole aspect of a common goal. As the sun goes up, we get a chance to look around. It’s then that you get to savor everything you are given. It is beyond anything you could imagine”, said junior Karalyn Van Aken.

In 2006, Van Aken, a native of Ontario, Canada, was named the “Female Rower of the Year”. She has also collected multiple National titles in Canada since 2003.

Seeing the team practice, it is hard to argue that the Miami Rowing team is one of the hardest working teams around. Six days a week they are waking up at 5 a.m. to practice, weights three times a week, the normal class schedule, and socializing. The dedication and sacrifices they must make is unfathomable.

“It’s very fast paced. You have to make a lot of sacrifices like going to bed early, waking up early, but it is very rewarding. It helps me to balance my time”, stated junior Kate Rickers. Rickers is a transfer from Louisville, where she rowed in her freshman year in 2007-2008.

Miami Rowing, started in 1986, has had recent success in the past couple of years. Despite still trying to work themselves up the ranks of the ACC, the performances at the start of the spring season is a show of good signs.

“We’re a very young, new team and have a long way to go. We have to build a strong base, but in the long term, we could definitely be a championship team. What we’re planning on doing now is having fun, rowing fast, and look back on the year and be happy with it”, admitted freshman Frida Schneider.

Despite being just a freshman, Schneider, who is originally from Norway, has emerged as one of the leaders for Miami Rowing. She consistently races in the stroke position of the first Varsity-8 boat, where Miami collected three wins over the past week of races. The stroke position is the rower closest to the stern on the boat, directly in front of the coxswain. The other seven rowers must follow the stroke’s timing, placing the blades of their oars in and out of the water at the same time as she does. This is essential to maximize the boat’s rate and rhythm throughout the race.

In the sport of rowing, there is very little room for error. The boat’s performance relies heavily on unison of stroke and maximum effort and power. The coxswain is given the responsibility of that very crucial aspect. Miami features a talented group of swains on this year’s team, including sophomores Shira Kharrazi and Christina Crocco and junior Alexa Romero.

“I am trying to get the team to a new level where we have to rely on ourselves to do things. We have to focus on working together. You want to feel like everyone around you is doing the best they can and pushing themselves”, said Kharrazi, who primarily serves as the coxswain for the first Varsity-8 boat. “It is one of the most rewarding things to be a coxswain and go out there to make a change to a boat and really see and feel it”, added Kharazzi.

These girls are a determined and hard working group of athletes. They put up with the early hours of practice and stain on the body all week for the common purpose to become winners.

“Our team is full of kids that are winners. They want to succeed and it’s nice because I don’t have to force them. They are a very self-motivated and a mature group of girls”, said Coach Tenenbaum.

The Hurricanes will have almost a month to prepare for their next regatta, taking part in the annual San Diego Crew Classic on Apr. 4-5 in California.