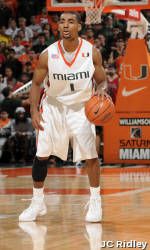 CORAL GABLES, Fla. (AP)–Jack McClinton overcame a slow start to score 24 points Saturday, and the Miami Hurricanes held North Carolina State without a field goal for more than 12 minutes in the second half and won 72-64.

McClinton missed his first seven shots before sinking a 3-pointer early in the second half. He finished 3-for-15 from the field but was 16-for-16 from the line — the best performance from the line in school history.

The Hurricanes (18-11, 7-9 Atlantic Coast Conference) helped their hopes of making the NCAA tournament for the second year in a row. North Carolina State (16-13, 6-10) is likely out of the mix unless it makes a big splash in the league tournament.

The Wolfpack missed 12 consecutive shots during their drought, which began when they led 42-36. Javier Gonzalez ended the streak with a minute left to cut Miami’s lead to 63-56.