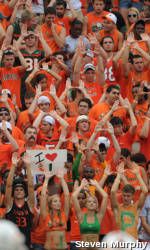 CORAL GABLES, Fla. – The University of Miami announced today season ticket prices in 24 sections totaling approximately 15,000 seats at Dolphin Stadium for the 2009 football season have been reduced and all other sections will remain unchanged from last year.

“The University of Miami athletic department is sensitive to the economic situation and will not raise season tickets prices,” UM Director of Athletics Kirby Hocutt said. “We have decided to reduce prices in a significant number of sections at Dolphin Stadium to continue to grow our fan base.”

Price reductions in the 400 level will affect 17 sections highlighted by the creation of a $119 per seat season ticket. Season Ticket pricing for the remaining sections have been cut by as much as $151 per seat.

Season prices for parking will remain at $210 for preferred Club level parking and $150 for general parking.

Non refundable deposits of $100 per seat and $200 per Club level seat, on new season tickets are currently being accepted at the UM Box Office at the Hecht Athletic Building on campus, via email at canestix@miami.edu or by calling 1-800-GO-CANES.