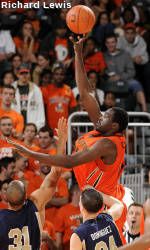 BOSTON, Mass. (AP) – An up-and-down week for Boston College ended with another loss.

Dwayne Collins had 13 points with seven rebounds and drew a key charging foul on Tyrese Rice in the final minute Saturday night to lead Miami to a 77-71 victory over Boston College (No. 24 ESPN/USA Today, No. 17 AP). It was the second consecutive loss for the Eagles — the first was to Harvard — since they beat top-ranked North Carolina to vault into the national rankings.

“We didn’t look at the fact that they lost to Harvard. They’re a Top 25 basketball team,” Miami coach Frank Haith said. “You don’t win in the Dean Dome if you’re not a good basketball team. We actually felt we were going to get their best game.”

Rice cut it to three points with a layup, then Lance Hurdle missed a jumper. But Collins grabbed the offensive rebound and, after a timeout, Jack McClinton made a layup to extend the lead to 70-65.

“The offensive rebound at the end was a big, big play for them,” BC coach Al Skinner said. “I don’t think we had them exactly where we wanted them, but we had a chance.”

Rice hit a pair of free throws, and then Reggie Jackson stole the ball from McClinton — drawing his fifth foul when he tried to get it back — and made two more foul shots to make it a one-point game with 33.9 seconds left. Brian Asbury hit two free throws for Miami, then Collins stood under the basket and took the offensive foul when Rice drove the lane.

“It was a bang-bang play,” Rice said. “It could have gone either way.”

It was a call not often made against a home team in the final minute, but Skinner stopped short of outwardly criticizing the officials.

“I’ve got to get an interpretation for what an offensive foul is. I don’t understand it,” he said, holding back a smirk. “I’ve got to figure it out, so I can coach my guys better.

Rice, who scored 25 against the Tar Heels and was the ACC player of the week, scored 21 with eight rebounds, shooting 6-for-18 from the field. Rakin Sanders had 18 with five rebounds, three blocks and three steals.

The Hurricanes went 7-of-8 from the line in the final 33 seconds, while BC missed 2-of-4 down the stretch to add to its woes.