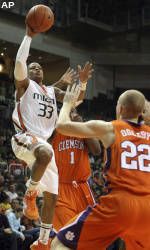 Demontez Stitt scored 10 points and Trevor Booker grabbed a game-high 16 rebounds for Clemson, which improved to 44-0 in games played before Dec. 22 over the past four years.

Cyrus McGowan scored 11 points, while Dwayne Collins and Brian Asbury each had 10 for the Hurricanes.

Miami ran out to a quick start, with McGowan making his first four shots to fuel a 21-9 burst over the first 9 minutes. It matched the largest deficit Clemson faced at any point this year.

Just like that, Clemson outscored Miami 16-0 over a 2 1/2 -minute spurt, its biggest run of consecutive points so far this season. David Potter scored all seven of his first-half points during the run, Rivers added five and Booker had the other four, putting Clemson on top 25-21 — and the Tigers wouldn’t trail again.

Miami was down 38-30 at intermission, then saw the deficit swell to 11 early in the second half before making a comeback try. McClinton had assists for easy layups on consecutive possessions, first to Collins and then Asbury, to bring Miami within 52-46 with 13:12 remaining.

But Clemson, which did the majority of its scoring by attacking the rim and the paint in the first half, used the long ball to snuff out the Hurricanes’ rally.