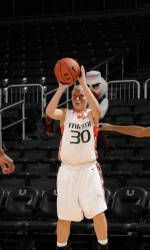 CORAL GABLES – Head coach Katie Meier had her University of Miami women’s basketball team (6-3) running on all cylinders in a 72-37 rout of the Binghamton Bearcats (4-6), Saturday afternoon at the BankUnited Center.

Miami’s defense swarmed all over Binghamton with their full court press for almost the entire game. The 37 points allowed were the fewest since giving up only 30 to USF on Nov. 23, 1996. The Hurricanes forced 26 turnovers while only committing 13 of its own.

All 14 members of Miami’s team saw the floor Saturday, including sophomore Epiphany Woodson, who made her season debut after missing the first eight games due to a leg injury. Woodson started 18 games her freshman year as the team’s point guard. Against Binghamton, she had two points and three assists in 13 minutes of play.

The Hurricanes converted on 13 of 29 three-point baskets for the game, the most since Miami made 14 in a 95-83 win over FIU in the WNIT Postseason Tournament on March 18, 2006. Five of those three-pointers came from senior guard LaToya Cunningham. The Vallejo, Calif. native leads the team with 25 three-point field goals and is now the school’s sixth most prolific three-point shooter with 115 for her career.

Cunningham led all scorers with 15 points while Vitalija Vasciunaite and Shenise Johnson each scored in double-figures with 10 points apiece. The Bearcats were without a double-digit scorer as they were led by Viive Rebane, who had nine.

All of Johnson’s 10 points came in the opening half, including the game’s first five points. Vasciunaite scored her first basket of the game on a fast-break layup, giving Miami a 9-7 lead with 13 minutes remaining in the opening half. The bucket gave the Hurricanes a lead they would never relinquish.

Miami ends their five-game homestand with a 4-1 record and will head to Orlando on Thursday, Dec. 18 to face UCF. Last season, The `Canes defeated the Golden Knights 64-56 in Coral Gables, behind Lamese James’ 14 points.