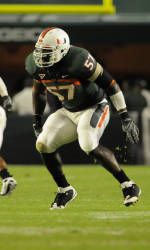 Wilson threw for 220 yards and ran for 58 more for the Wolfpack (6-6, 4-4 Atlantic Coast Conference), who pushed ahead for good late in the third quarter on Wilson’s 32-yard pass to Owen Spencer. Andre Brown also scored twice and ran for 93 of the Wolfpack’s 219 rushing yards against a Miami defense ranked 20th nationally.

N.C. State entered the final month of the season at 2-6 before beating instate rivals Duke, Wake Forest and North Carolina to keep its bowl hopes alive. Yet, unlike last year, the Wolfpack made good on their last chance to become eligible for the postseason.

Last season, the Wolfpack bounced back from a 1-5 start with four straight wins, but ended the season with a 20-point loss at Wake Forest followed by a 37-0 home loss to Maryland to waste that effort. It was a memory that stayed with the team through recent weeks, particularly as they prepared for this game.

Javarris James ran for two touchdowns for the Hurricanes (7-5, 4-4), who led 21-20 midway through the third before the Wolfpack went ahead to stay. The Hurricanes were coming off a 41-23 loss at Georgia Tech on Nov. 20, a game in which they had a chance to reach the ACC championship game by winning out.

Now they’re ending the regular season with two straight losses in which they couldn’t stop the run. They allowed 472 yards rushing against the Yellow Jackets and their triple-option offense, then watched as Wilson, Brown and Jamelle Eugene each ran for at least 58 yards.

After James’ 1-yard run pushed the Hurricanes ahead, the Wolfpack got a 42-yard pass from Wilson to T.J. Graham to reach Miami territory. On the next play, Wilson found Spencer on the left side – despite the ball being tipped by Sean Spence about two-thirds of the way through its flight – and Spencer spun free of Ryan Hill’s tackle and into the end zone with 5:51 left in the third quarter. Wilson connected with Eugene on the 2-point conversion to make it 28-21.

The Wolfpack pushed that lead to 10 on Josh Czajkowski’s career-long 42-yard field goal midway through the fourth quarter, then used an interception from Nate Irving to set up Brown’s 4-yard touchdown run for the 38-21 lead with 2:35 left.

Once again, Wilson’s mobility caused headaches for an opposing defense. The redshirt freshman had a 29-yard scramble to set up his short TD toss to Brown on the Wolfpack’s first drive, then scored from 29 yards early in the second quarter on a keeper to tie the game at 14.

Wilson also extended his school-record streak of 226 passes without an interception, the longest in the nation. In his past eight starts, Wilson has thrown 16 touchdown passes with no picks.