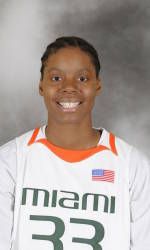 CORAL GABLES – The University of Miami women’s basketball team (1-0) opened their regular season with a crushing 91-42 victory over the Norfolk State Spartans (0-1) at the BankUnited Center on Youth Day, Friday afternoon, in front of a crowd of almost 1,600 fans.

The Hurricanes were firing on all cylinders for the entire 40 minutes as they scored 45 points in the opening half and 46 in the second. Senior Latoya Drake poured in a game and career-high 22 points, 13 coming before the break.

In that opening period, Drake went 6-7 from the field and was the beneficiary of many of LaToya Cunningham’s six assists. For the game, Cunningham matched her career-high with nine assists to go along with her 11 points. The senior captain also added a pair of three-point baskets.

The LaToyas weren’t the only ladies to have career games. Diane Barnes registered two career marks. The junior tallied 12 points and grabbed 10 rebounds, registering her first double-double as a member of the Hurricanes.

Freshman Shenise Johnson almost recorded a double-double in her first collegiate game, as she scored 12 points and ripped down nine rebounds. The 2008 McDonald’s All-American also dished out five assists, while only committing one turnover.

Another freshman making a solid collegiate debut was Anchorage, Alaska’s Sylvia Bullock, who scored nine points in the game and grabbed five rebounds, four of which came on the offensive end.

Making her first collegiate start, sophomore Briyana Blair had nine rebounds and added six points. Vitalija Vasciunaite, another sophomore, showed off her deep-threat capabilities as she hit two three-pointers on her way to nine points. The Lithuania native also picked up four steals in the game, she had three all of last season.

As a team the Hurricanes dominated every statistical category, outrebounding the Spartans 60-27 and forcing an astounding 29 turnovers.

Miami’s 49 point win was the largest margin of victory since a 67-point trouncing of Morris Brown in 2002.

The Hurricanes will face Wisconsin-Green Bay on Sunday at 2 p.m. at the BankUnited Center. For ticket information, please call 1-800-Go-Canes or visit hurricanesports.com