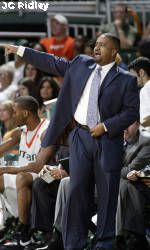 CORAL GABLES, Fla. – With the start of the 2008-09 men’s basketball season just under a month away, the University of Miami men’s basketball team officially begins team practice on Friday, Oct. 17, at the BankUnited Center.

Fifth-year head coach Frank Haith and his veteran squad looks to build on the success from their 2007-08 season in which the Hurricanes finished 23-11 and advanced to the second round of the NCAA Tournament.

Fans will have their first opportunity to see Miami basketball live, including newcomers DeQuan Jones and Reggie Johnson, on Saturday at Hurricanes Hoopfest ‘08 at the BankUnited Center from 10 a.m. until noon. Both the men’s and women’s teams invite fans to a 30-minute open practice session for each team, as well as an autograph session in which fans will be able to meet their favorite Hurricanes.

Four starters return for Miami in 2008-09, including All-ACC First Team selection Jack McClinton. The Hurricanes went a program-best 14-2 at home in the BankUnited Center last season, and are hoping that “Haith’s Faithful” return to help the Hurricanes through a challenging schedule that includes non-conference contests versus Ohio State and Kentucky, as well as an always-difficult ACC slate with home and away series with North Carolina, Maryland, Florida State, Boston College and NC State.

The Hurricanes will host a pair of exhibition games – Nov. 1 versus Florida Memorial (time to be announced) and Nov. 8 versus Barry at 5:30 p.m. – before opening the regular season at home versus Florida Southern on Nov. 15 at 7:30 p.m.