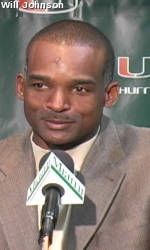 Video and Transcript of the Randy Shannon Weekly Press Conference

Coral Gables, Fla. – University of Miami head football coach Randy Shannon met with the media Tuesday for his first weekly press conference of the 2008 season. Here’s what coach Shannon had to say:

OPENING STATEMENTS
“We’re a couple of days away from our first game against Charleston Southern. The team is excited. We had a great practice last night and we have one tonight. We’re looking forward to our first game in Dolphin Stadium.”

“Charleston Southern has a new defensive coordinator, so we really don’t know what they’re going to run on defense. We’ll have to go back to some Clemson stuff, and try to find some film on some of the other places that he’s been and get some ideas about some things he’s done with those programs. Also, they have a new special teams’ coordinator, but there’s really only so much you can do on special teams. But we worked on the punt return game a lot, because that’s the biggest part of a game that can make or break a team and that’s punt protection.”

ON BYRNE’S SNAPPING
“Byrne’s been snapping since spring. He’s done a great job, and as a matter of fact, we’re a better team with him snapping right now. We’re getting the ball down to 2.0 from snap to kick. Sometimes when you keep working guys at a different position they get better at it. That’s the positive about getting him in the game right now.”

ON POTENTIAL DISTRACTIONS
“It’s not really a distraction with what’s going on right now. It’s kind of a different team. You have adversities and you deal with them, but you stay focused on the biggest product which you’re trying to get done and then you move forward.”

ON QUARTERBACKS Jacory Harris AND Robert Marve PLAYING AS FRESHMEN
“They both handle themselves with a lot of pride and a lot of poise. As quarterbacks, they put a lot of pressure on themselves. They put the blame on themselves as far as missing passes.They’ll say they didn’t get it off on time, or they’ll say it was their fault. There are going to be some bad plays in games, but when they take the blame for things in practice, it’s easier for the team to be relaxed for something like that in a game.”

“I became aware of Jacory his 11th grade year as he would come to games and stand on the sidelines and interact with the players. He would either be with Sean [Spence] or he’d be with Tommy [Streeter] and they would interact with the guys well. He was never just with offense or defense. He was with different guys and handled himself so well.”

“As far as Marve, I noticed him when he was at camps in the summer. I saw he was throwing the ball better than a lot of other people for his age, and he was holding up in camps. He was going up against some premier quarterbacks and he handled himself so well. He would tell receivers to run a little shorter, and I’ll get you the ball. Things like that impressed me about him.”

ON WHETHER OR NOT HE’S KEEPING THINGS SIMPLE FOR GAME ONE
“I am not really changing the plays for the young quarterbacks. I just think you put the ball into the playmakers’ hands. It doesn’t always have to be a 90-yard pass or anything like that. If a guy takes a pass in the flats and takes it 70-yards, then it’s still a 70-yard pass. Whether you throw it 70 or you throw it five, it will still take you the same distance.”

ON THE EXCITEMENT OF THE FIRST GAME AT DOLPHIN STADIUM
“It’s always exciting when you play the first game of the season. It’s a night game, and I think you have a lot of fans interested in seeing the product because of the recruiting and things like that.”

ON PLAYING SO MANY FRESHMEN INCLUDING YOUNG RECEIVERS
“The receivers are going to play because freshmen have to play. You can’t go into a game with just three receivers, and have no one else for a backup. Do you feel uncomfortable playing so many freshmen? Yeah, but what can you do about it? We have talented young players who will play and we need to build depth.”