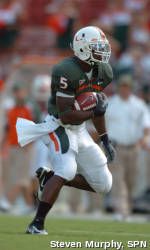 THIS WEEK’S GAME
The University of Miami will embark upon a new era in its football history when the Hurricanes host the Charleston Southern Buccaneers, Aug. 28 at 7:30 p.m., in their first game in their new home – Dolphin Stadium.

Miami won its season opener over Marshall, 31-3, last season, snapping a two-game losing skid in openers. The Hurricanes had won nine straight season openers before falling to rival Florida State in 2005 and 2006.

Head coach Randy Shannon enters his second season at the helm of the Hurricane program. He returns 48 letterwinners including 11 starters. Miami welcomes 33 newcomers. The 2008 signing class ranked No. 1 in the country by ESPN.com.

The Hurricanes return one of the top offensive lines in the country led by offensive tackle Jason Fox. That line combined with running back duo junior Javarris James and sophomore Graig Cooper finished third in rushing in the Atlantic Coast Conference last season. Cooper is the team’s leading returning rusher as he gained 682 yards on 125 carries and averaged 5.5 yards per carry. His 682 yards ranked third on the school’s all-time true freshman rushing list and fourth nationally in rushing among true freshmen last season. James gained 582 yards on 159 attempts and scored four touchdowns.

Defensively, UM returns junior linebacker Colin McCarthy, who ranked fifth on the team in tackles in 2007. He played in 11 games and tied for the team-lead with 12 tackles for loss while finishing with 74 tackles. Miami’s defense gets a boost with the return of senior linebacker Glenn Cook, who missed the 2007 season after starting 11 of 12 games in 2006. Four regular starters return in defensive end Eric Moncur, McCarthy and defensive backs Bruce Johnson and DeMarcus Van Dyke.

THE OPPONENT
Charleston Southern is a member of the Big South Conference and a FCS (Football Championship Subdivision (formerly I-AA)) school. The Buccaneers are coming off a season in which the team won at least five games for the fourth straight season in 2007 finishing 5-6. Three of CSU’s top four receivers return, including All-Big South selection Dee Brown, who recorded 898 yards and nine touchdowns in 2007. Defensively, all-conference defensive linemen Jake Killeen and Justin Witzmann return. CSU has 44 players from the state of Florida on its roster.

THE SERIES
This is the first ever meeting between Miami and Charleston Southern.

THE COACHES
Randy Shannon is 5-7 after one season at Miami. Charleston Southern’s Jay Mills is 27-28 in five seasons with the Buccaneers.

 Last Spring, the NCAA released its annual Academic Progress Report (APR) and the Hurricane football team scored a 969, the eighth-highest mark out of the 119 Bowl Sub-division football programs. Miami’s score – also the third-highest mark in the 12-team Atlantic Coast Conference – put the team in the 80th-90th percentile nationally based on its performance in the classroom.

 Miami will start a freshman quarterback for the first time since 1983. Bernie Kosar started as a redshirt freshman in 1983.