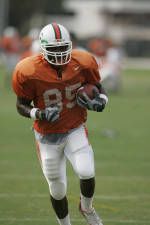 UM Completes Fall Camp with its Third and Final Scrimmage

CORAL GABLES, Fla. – The University of Miami closed out its fall camp Tuesday night with its third and final scrimmage prior to next week’s season-opener against Charleston Southern. The Hurricanes practiced for about an hour-and-a-half at UM’s Greentree Practice Fields, working through typical game situations with the contest against the Buccaneers just nine days away.

“We had a lot of good things happen tonight,” head coach Randy Shannon said. “We worked on a lot of situational work with the special teams.”

The Hurricanes focused on a number of different scenarios in kickoff, punt and field goal formations, in addition to typical 11-on-11 situations from different parts of the field.

Conditions for the scrimmage were favorable, with cloudy skies and temperatures in the lower 80s. Despite rain falling throughout most of the day in Coral Gables, it cleared out by the start of the scrimmage, providing UM with its first rain-free scrimmage in three days.

Offensively, wide receiver Leonard Hankerson had a good evening, catching three touchdowns on the night. For the second time in three scrimmages, the offense did not commit a turnover.

Post-scrimmage notes
 Tuesday’s scrimmage lasted approximately an hour-and-a-half.
 Shannon noted that both the punt blocking and punt returning units stood out. He pointed to wide receiver Thearon Collier as a player that stood out in the return game.
 Shannon also credited the team for protecting the football and limiting penalties.
 UM will now take Wednesday off before returning to practice Thursday morning.
 The Hurricanes’ season-opener against Charleston Southern is nine days away.