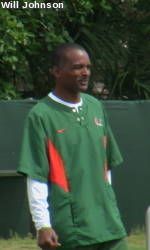 CORAL GABLES, Fla. – The University of Miami football team completed its fourth and final two-a-day on Sunday, working out in helmets and shorts in the morning before going to full pads in the afternoon at the Greentree Practice Fields.

After a light practice in the morning that saw the Hurricanes focus solely on special teams work, the team returned late in the afternoon for a normal practice session.

UM worked for about two hours in the afternoon, with the outermost bands of Tropical Storm Fay bringing rain and wind about mid-way through practice. Temperatures remained in the mid-to-upper 80’s throughout, but cloudy skies and eventual rain showers slightly cooled conditions as the afternoon progressed.

Shannon noted that the afternoon was “just a regular practice.” The team worked in usual group drills, with a first team vs. first team and second team vs. second team structure.

Sunday’s morning session lasted just over an hour, with the team walking through all phases of special teams’ formations. After rain showers passed through the Coral Gables area before daybreak, the team practiced on wet fields with temperatures in the mid 80’s from 8 a.m. to 9 a.m.

Post-practice notes
 Sunday’s morning session lasted just over an hour while the afternoon practice ran approximately two hours.
 Sunday marked the team’s final two-a-day of fall camp.
 Defensive lineman Dwayne Hendricks returned to practice after sitting out Friday’s scrimmage
 Recapping Friday’s scrimmage, Shannon noted on Sunday that “we had two too many turnovers and we had penalties that killed drives and kept drives going. We’ve got to improve on that.”
 UM will return to the practice fields Monday morning at 7:50 a.m.
 The Hurricanes’ season-opener against Charleston Southern is 11 days away.