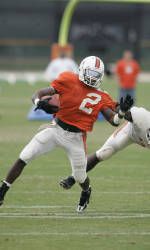 “We had a lot of good things going on today,” head coach Randy Shannon said. “The offense moved the ball up and down the field a little bit better than what they have been all along. They scored a couple touchdowns.

“When it came down towards the end of the game, the defense really picked it up and caused a couple of turnovers,” Shannon added.

Conditions were favorable with cloudy skies and temperatures in the mid 80s throughout.

“We’ve got to find some depth at running back,” Shannon noted. “We’ve got six guys. We can’t get caught like last year when we ran out of running backs. The more work we get for those guys, the better off we’ll be. If they do a great job picking up the offense, we’ll be OK.”

Post-scrimmage notes
 Friday night’s scrimmage lasted approximately an hour-and-a-half
 The Hurricanes will take Saturday off before returning to the practice fields on Sunday for their fourth and final two-a-day. Practices Sunday are slated for 7:50 a.m. and 3:45 p.m.
 As expected, veteran players were limited during the scrimmage while younger players took the majority of the reps.
 Shannon praised the play of wide receiver Travis Benjamin and running backs Shawnbrey McNeal, Damien Berry and Lee Chambers. Benjamin turned a short pass into a long touchdown while McNeal scored the first touchdown of the night.
 Shannon noted the team has become “a tougher team with the addition of the fullbacks. They’re really doing a great job of blocking for us.”
 The Hurricanes’ season-opener against Charleston Southern is 13 days away.