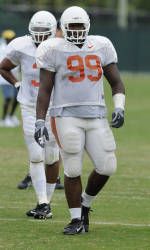 CORAL GABLES, Fla. – The University of Miami football team opened its second full week of practice Monday morning with its second two-a-day this fall at the Greentree Practice Fields. Just two days after the team’s first scrimmage of camp, UM worked through its second of four two-a-days this fall with a practice early in the morning followed by another late in the afternoon.

The team placed an emphasis on special teams’ coverage, specifically kickoff and punt formations, in addition to structured plays in short yardage and red zone situations.

“Our attitude has been great,” head coach Randy Shannon said. “It has been phenomenal. That’s the one thing that I like about this team that is a little different. They like to practice, they’re cheerful, and they’re having fun with it.”

The Hurricanes practiced under normal morning conditions for mid-August in South Florida, with sunny skies and temperatures in the lower-to-mid 80s with a heat index reaching 94 by the end of the two-and-a-half hour session.

The team however got some relief in the afternoon, with overcast skies, a light rain early on and temperatures in the lower 80s throughout.

On the progress of the quarterbacks, Shannon noted, “They’re doing well. It’s no different than what it was last week – they are executing the offense. Sometimes they’ll make mistakes but for the most part, they are doing what we are asking them to do.”