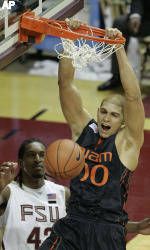 Miami Comes up Just Short at Florida State in Overtime

TALLAHASSEE, Fla. (AP) – Ralph Mims scored 25 points, including the decisive basket of the game, to lead Florida State to a 75-72 win Saturday over Miami – the Seminoles fifth straight victory over their downstate rival.

Mims slashed down the lane for a layup with 1:49 left that gave the Seminoles a 75-70 lead and Miami’s Lance Hurdle hit two free throws 11 seconds later as both teams went scoreless the final 1:38.

The game went into overtime tied at 66 after Miami’s James Dews watched his 3-point jumper rim out at the buzzer. Florida State’s Ryan Reid had tied the game with two free throws with 33 seconds left.

Miami (21-9, 8-8 ACC) was whistled for a season-high tying 31 fouls and Florida State 22 in a wild game that saw the Seminoles shoot 42 free throws and the Hurricanes 24.

Jason Rich and Toney Douglas each added 16 points for Florida State, which had lost twice earlier this season in ACC overtime games.

The start of the game was delayed 16 minutes due to a malfunctioning shot clock before officials decided to play without one and the public address announcer letting the players know when 10 seconds remained on the clock. The clock worked properly for much of the second half before failing a final time with about three minutes left in regulation.