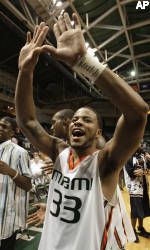 CORAL GABLES, Fla. (AP) — The Miami Hurricanes ended a run of 13 consecutive losses to Boston College, overcoming an 11-point deficit in the second half to win 74-61 Wednesday.

Jack McClinton and Lance Hurdle led the rally by the Hurricanes (21-8, 8-7 Atlantic Coast Conference), who bolstered their chances of making the NCAA tournament for the first time since 2002. Miami won for the sixth time in its past seven games and improved to 14-2 at home this season, the best home record in school history.

The Hurricanes reached eight victories in the ACC for the first time since joining the league in 2004-05. Their final game before the conference tournament is Saturday at Florida State

McClinton, the league’s leading 3-point shooter, failed to sink a basket in the first 29 minutes. He then made four 3-pointers the rest of the way and finished with 21 points.

Hurdle scored 19 points, just one point shy of his career high, and shut out Boston College’s dangerous Tyrese Rice during a 20-minute stretch. In the second half, Hurdle sank a 3-pointer and converted a pair of three-point plays.

Rice, coming off a 46-point game against North Carolina, had 14 of the Eagles’ first 16 points and outscored Miami through most of the first half. But he finished with only 22 points and missed 13 of 20 shots.

The Hurricanes missed 10 of their first 11 shots to fall behind 11-4, and McClinton was held scoreless for the first 15 minutes as Boston College’s margin grew to 22-13.

Two minutes into the second half, the Hurricanes were shooting 20 percent (6-for-30) and trailed by their biggest deficit, 31-20.

James Dews then sank a 3-pointer, the first basket by a Miami guard. Hurdle twice cut the margin to five, and his three-point play with nine minutes left gave the Hurricanes their first lead since the opening minutes at 45-43.