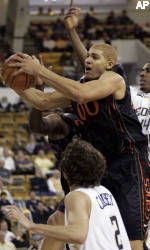 ATLANTA (AP) – Jack McClinton sank the go-ahead 3-pointer, his sixth of the game, with 45 seconds left and Miami held on in the final seconds for a 64-63 win over Georgia Tech on Sunday.

Georgia Tech had four misses before Matt Causey, who scored 20 points, hit a 3-pointer with 1.9 seconds left. Causey was guarded closely by Lance Hurdle on the shot, but Hurdle was not called for a foul.

Georgia Tech fell to 4-6 at home, including a 1-4 mark in ACC games at Alexander Memorial Coliseum.

James Dews had 11 points for Miami. Jeremis Smith had 11 for Georgia Tech.

McClinton’s fifth 3-pointer tied the game at 57-57 with 2:16 left, but Anthony Morrow answered with a 3 for Georgia Tech. Miami pulled even again at 60-60 on Anthony King’s three-point play with 1:27 left.

Causey scored eight straight points, including two 3-pointers, in the first five minutes to give Georgia Tech a 10-5 lead, but the Yellow Jackets were hurt by 15 turnovers in the half.

Miami led 27-26 at the break on McClinton’s first 3-pointer after four misses.

Causey remained in the Georgia Tech lockerroom for the start of the second half. A Georgia Tech spokesman said Causey was hyperventilating. The senior returned to the bench less than three minutes into the second half and entered the game at the 15:48 mark.