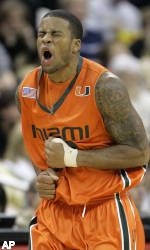 Dwayne Collins could have given Miami the lead in the final minute, but he missed a layup, James Johnson collected the rebound and Wake Forest called timeout with 30.1 seconds left.

Smith dribbled out most of the clock before driving right, pulling up near the elbow and knocking down a jumper over Miami star Jack McClinton — nearly the same final-seconds shot he sank last month to beat Virginia Tech. The Hurricanes then got the ball to McClinton, who was stripped by Harvey Hale as the buzzer sounded.

It wasn’t enough to keep the Hurricanes from their fourth loss in five games, and yet another close one at the Demon Deacons’ hands. Miami’s last three losses in the series have come by a combined seven points.

Chas McFarland added 10 points for Wake Forest, and Johnson, the team’s leading scorer at 15.1 points per game, was held to nine — all in the second half.

Brian Asbury scored 11 of his 13 points in the second half and Collins finished with 12 for Miami, which shot nearly 55 percent. But the Hurricanes couldn’t get McClinton, their star sharpshooter, enough second-half shots against a Wake Forest playing without top defender L.D. Williams, out three weeks with a broken right hand.

With Smith and Hale pestering him, McClinton was just 1-of-4 while playing 19 minutes in the second half.

Teague used some flashy play to surpass his previous personal-best of 26 points, with his steal from Lance Hurdle and subsequent fast-break layup making it 67-60 with just fewer than 6 minutes left. But that was Wake Forest’s last basket until Smith swished his game-winner.

Wake Forest endured some streaky shooting early, falling behind 17-10 after one particularly rough stretch in which it missed nine of 10 shots.

Almost immediately, the Demon Deacons got hot — overcoming that big deficit by knocking down six straight shots during a 16-5 run and going up 26-22 on McFarland’s three-point play with 4:48 left.