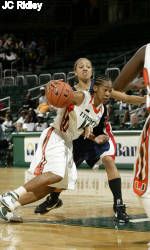 The Hurricanes didn’t cool off from their blow-out win over Central Arkansas just three days ago, as they shot a sizzling 67.7 percent from the field in the first-half and 59 percent for the game.

For the time since the 2003 UM Thanksgiving Tournament, the `Canes posted 25 or more assists in back-to-back games, dishing out 27 against CSU.   Freshman point guard Epiphany Woodson led her team with a six assists.  The freshman point guard continues to impress as she dealt out her career-high in assists to only one turnover.  She also scored in double-figures for the second consecutive game with 10 points

Maurita Reid was nearly flawless, especially in the first half, where she scored 20 of her season-high 27 points.  The senior guard was 8-9 from the field in the opening period, including 4-4 from three-point land.  Reid ended the game with five three three-point field goals for the second straight game, tying her career-high.

Charmaine Clark and LaToya Cunningham each scored 11 points, while Lamese James made her presence felt in the paint, scoring nine points and pulling down four tough rebounds.  Reid led the Hurricanes with seven rebounds.

Pam Tolbert of Charleston Southern matched Reid’s 27 points, hitting six three-pointers on her way to playing in all 40 minutes.  Her outside shot could not be felt in the paint though, as the Hurricanes dominated the scoring down low, 40-16.

Miami will face No.12 Duke this Saturday to open their ACC schedule.  Game time is set for 7 p.m. at the BankUnitedCenter.